Back to Blogs | Coverage & Design

Before developing a theme, you have to come up with an idea. If you’re stuck for where to start, consider new avenues for finding inspiration. We’ve got four new options to get you thinking.

Walking down to the counselors’ office can open up a whole new world of theme ideas. College brochures use the same concepts yearbook themes do, featuring strong photography, trendy colors and crisp typography. They also have snappy catchphrases, similar to yearbook themes.

The University of Missouri takes advantage of its nickname, “Mizzou,” for verbal appeal in its marketing campaigns. For several years, the university used “There’s only one Mizzou” in its brochures and online material. The clever wording suggests to prospective students the uniqueness of the university. If your school has an unusual name or it’s the single middle or high school in the district, “There’s only one … ” could be a creative theme choice.

Mizzou’s printed brochures also had visual impact. A bold, sans serif font in all caps stands out on the yellow background. A small sliver of plaid added to the headlines creates an unusual but highly creative graphic element. The plaid and bold font inspired Allen High School to incorporate those looks in its 2016 book featuring the theme “The Allen Way.”

A University of Missouri brochure inspired Allen High School to use plaid and a bold sans serif font in its “The Allen Way” theme in 2016. The “There’s Only One Mizzou” college campaign also is a creative theme idea for a school with an unusual name or one that’s the solo middle or high school in the district.

Ads for resorts, cities and states also can provide visual and verbal inspiration. They offer enticing photos, creative font choices and compelling catchphrases to persuade the reader to take a vacation at their hotel or in their city or state. New Orleans’s insider guide features a “My Nola” theme while Virginia Beach incorporates a “This is the life” mantra into their travel campaigns. “Texas. Island style.” is a catchy statement for a tourism ad for Port Aransas and Mustang Island. An ad for Montana inspires two potential theme ideas, “The Yellowstone you haven’t seen yet,” and “Boldly Go.” A yearbook theme focusing on what you haven’t seen is a cool starting place for theme development. 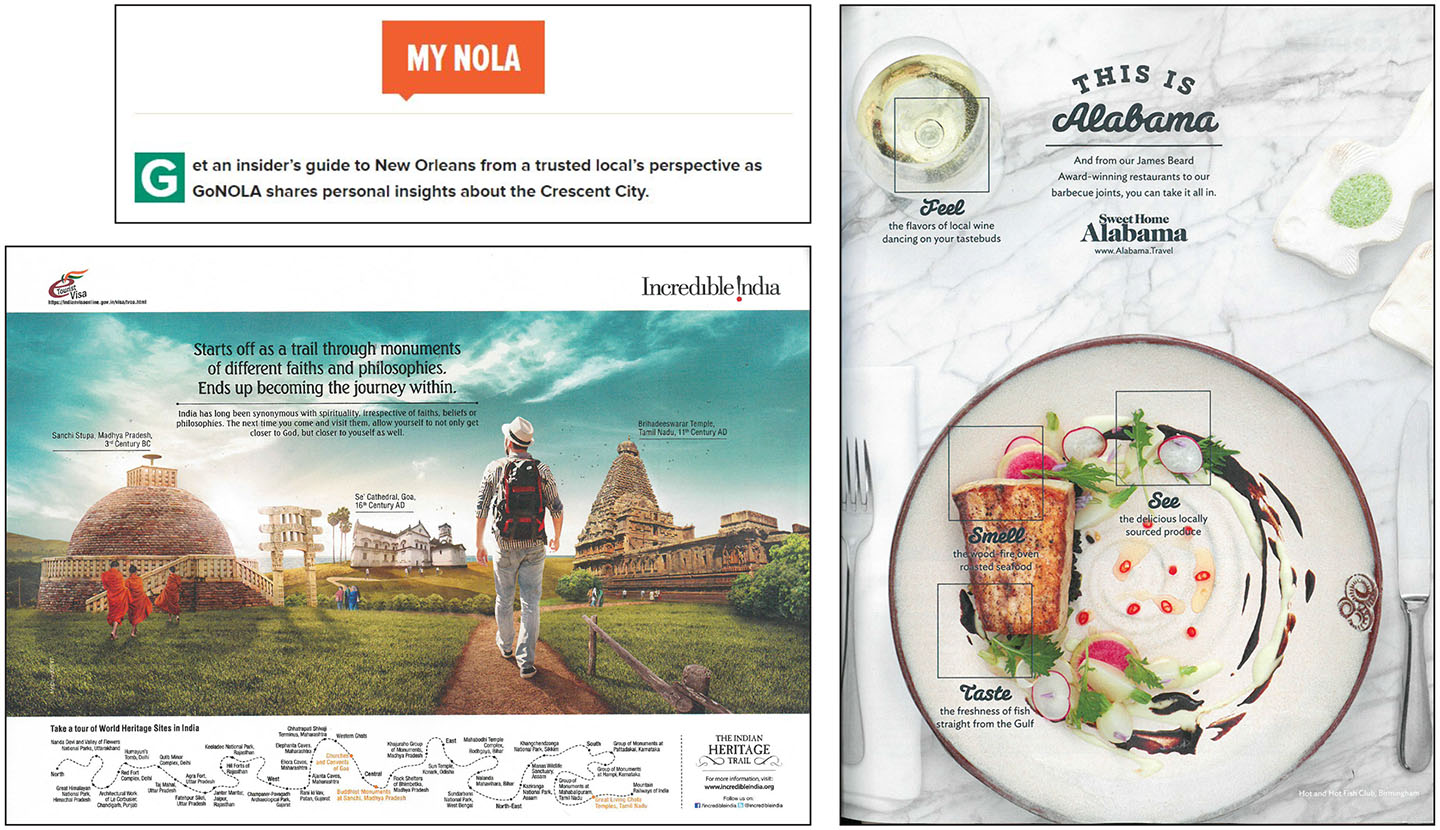 A tourism ad for India showcases an “Incredible India” theme with gorgeous photography and a cool map of heritage sites. An Alabama ad appeals to the reader with its beautiful typography, simple catchphrase and use of squares.

Even going to the theater can inspire a yearbook theme. The promotional material for the movie “We are Marshall” influenced Connally High School to use the “We are…” concept for its 2008 yearbook theme. Two years later, the Governor staff found inspiration again in the media. A Baylor magazine article featured what students should bring to college and what they should do before graduation. The checklist sparked the idea for a “Things to do before you graduate” theme. The staff carried the concept throughout the book with section names and spread headlines. For example, the boys basketball spread headline was “Hit a three-pointer” while the halftime spread was “Put on a show.” Both ideas became beautifully developed themes, thanks to looking at a movie poster and a magazine article.

The Governor staff took inspiration from a movie poster for the 2008 book and a Baylor article about graduation for the 2010 book. To coincide with the year, Connally editors came up with 10 things for students to do before they graduate, using those “things” to organize the student life, sports, academics and people sections.

Walking through a bookstore can also spark inspiration. Book covers and jacket designs can inspire visual and verbal ideas. A journal inspired Legacy High School’s journal-like theme in 2014. “Make it Yours” had interactive sidebars where students could fill in their own answers. They also featured five covers, allowing students to choose their color, truly making the book their own. Two years later, another trip to Barnes & Noble influenced the look of The Arena. A Paleo cookbook with a red cover and black box inspired the staff’s “as in” cover. Coming up with a yearbook theme can be an exciting and fun process. But if you’re stressing over finding new ideas, maybe it’s time to look for inspiration in unconventional places. It might be as simple as walking through a bookstore or going to a movie. You never know where your next theme might come from.