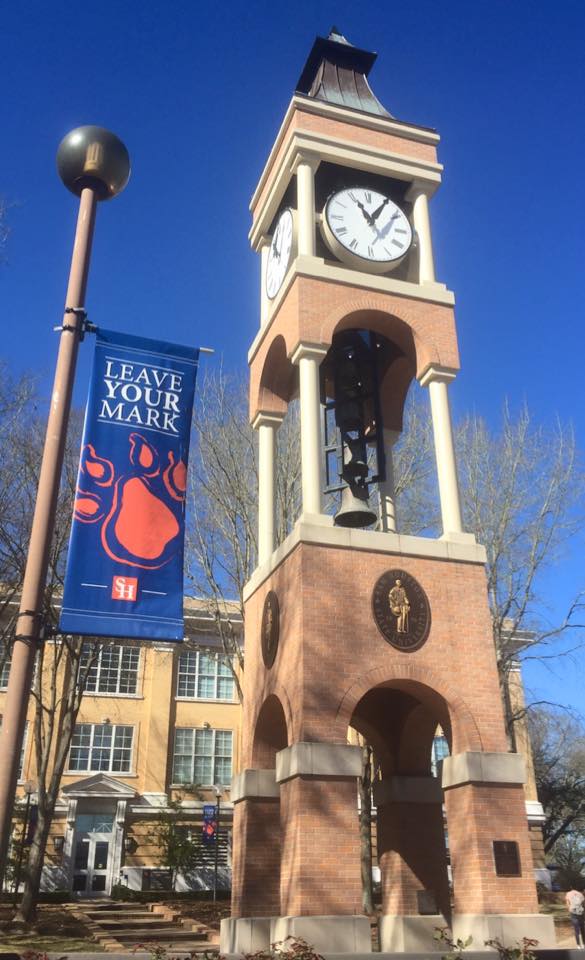 Sam Houston State University was established in 1879 in Huntsville, Texas, and is a member of the Texas State University System. SHSU's motto is "The measure of a Life is its Service." With more than 20,000 Bearkats enrolled, the school ranks among the country's fastest growing universities.

SHSU was originally home to Austin College, the Presbyterian institution that relocated to Sherman, Texas in 1876. Austin Hall was constructed in 1851 and is the oldest university building west of the Mississippi still in operation. Sam Houston himself attended and participated in the original dedication of the building. He is buried nearby in Oakwood Cemetery.

Constructed in 1902, the one-room Peabody Memorial Library was the first free-standing campus library in Texas. Built in Classical and Romanesque Revival style and fully restored, it is now used as a venue for special university events.

Sammy Bearkat is the school's official mascot, with orange and white serving as the official colors. It is doubtful those who coined the "Bearkat" nickname had a particular animal in mind, and since the animal was thought more mythical than real, the spelling settled upon was "Bearkat." In the late 1940s, then president Harmon Lowman attempted to change the SHSU mascot from Bearkats to "Ravens" after General Sam Houston's Cherokee nickname.  Alumni later voted unanimously to keep the Bearkat name.
SHSU's primary rival is Stephen F. Austin State University (SFA) with an annual football game named the Battle of the Piney Woods, dating back to 1923. Since 2010, the series has been played at NRG Stadium in Houston.